Pope Francis has proclaimed a “Year of St. Joseph”

A Lenten Journey with St. Joseph for Families

The Year of St. Joseph: What Catholics need to know

St. Joseph is the patron saint of fathers, families, and workers.  Other patronages are listed here.

How to Celebrate the Year of St. Joseph

What the Church Says About St. Joseph

“Go to Joseph! Have recourse with special confidence to St. Joseph, for his protection is most powerful, as he is the patron of the universal Church.” – Blessed Pope Pius IX

“Whoever fails to find a Master to teach him how to pray, should choose this glorious Saint, and he will not go astray.” – St. Teresa of Avila

“Whereas Adam and Eve were the source of evil which was unleashed on the world, Joseph and Mary are the summit from which holiness spreads all over the earth.” – Pope St. John Paul II

The great Doctor of the Church and bishop of Geneva, St. Francis de Sales, was not only a faithful devotee of the Guardian of the Redeemer but his avid proponent as well.

St. Francis de Sales made St. Joseph the special Patron of the religious order he founded, the Order of the Visitation. In addition to naming at least one of his parishes in his honor, he set Joseph as the model of the interior life and contemplative prayer for his own spiritual daughters–and in particular for the novices, who were to look upon St. Joseph as their novice “master” and guide (A Manual of Practical Devotion to the Glorious Patriarch St. Joseph, translated by Fr. Patrignani, p. 78). 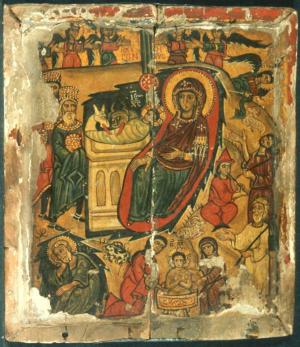 In the Early centuries of Christianity, Saint Joseph appeared only in images of the Nativity, likely because that is where he is found in Scripture. Most of the narrative surrounding Joseph comes from the Gospel of Matthew and the traditional accounts documented in the Protoevangelium of James. Some of the oldest extent images of Joseph can be seen among the icons of Saint Catherine’s Monastery in Egypt’s Sinai. In these images, dating from perhaps as early as the 7th century, Mary is central to the scene, the animals adore the infant Christ, as angels, magi, shepherds, and maids attend our Lord, and musicians play.  Saint Joseph is shown in what for centuries became his characteristic pose. He sits in the corner of the cave, chin in hand, pondering what James calls “Joseph’s Troubles”  – the awesome and terrible responsibility of the care and protection of God incarnate as a human child.

St. Joseph, patron of the Universal Church, pray for us!

With thanks and acknowledgment to a Year of St Joseph.