THE STATUE OF OUR LADY OF WALSINGHAM

THE STATUE OF OUR LADY OF WALSINGHAM

All Catholic pilgrimages are centred on the Slipper Chapel, where the statue of Our Lady of Walsingham is enthroned. The statue is of course a modern one but has been modelled as closely as possible on the medieval statue. Our Lady is depicted in traditional style seated on a simple chair of state with the Child Jesus on her knee. She wears a Saxon crown in token of her ancient queen-ship and carries the lily of purity. 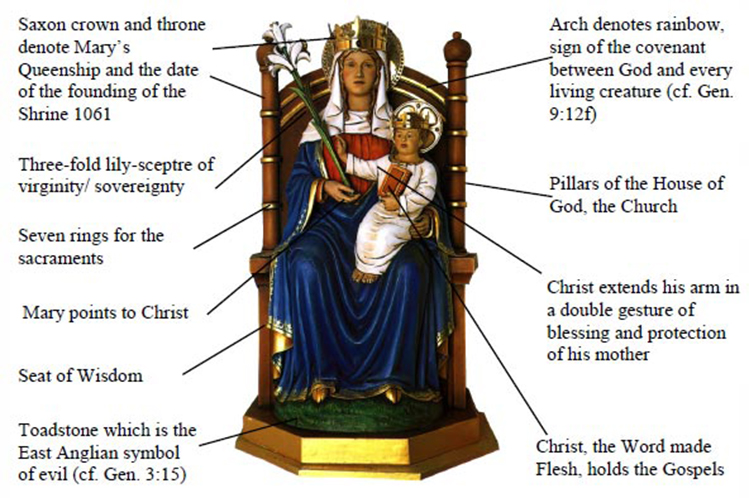 The statue is not remarkable in itself but the sincere attempt to recreate the form of the old statue when the only available evidence came from circular pilgrim medallion is praiseworthy, and the result is pleasing and devotional.

In recent years Our Lady has been depicted frequently as a lonely young girl. Our Lady of Lourdes and Our Lady of Fatima stand alone. Our Lady of Walsingham emphasises her Motherhood and her continual effort to present her Son to the world. 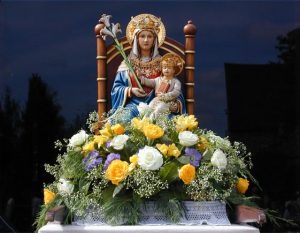 The statue has an importance of its own not only because of its situation at the heart of the National Shrine, but because it is one of the few statues in the world to be crowned in the name of the Pope. The crowning was during a Marian Year, on 15th August 1954, by Archbishop O’Hara, who was to become Apostolic Delegate to Great Britain. At the same time the women of England presented a costly crown of gold and jewels which is placed on the statue at certain times.

The devotion to Our Lady of Walsingham received a further mark of papal approval during the visit to Britain of Pope John Paul II in 1982. The statue was taken from the Slipper Chapel to Wembley Stadium and occupied a place of honour on the altar while the Pope celebrated Mass in the presence of many thousands of people.