THE SLIPPER CHAPEL (THE SHRINE) 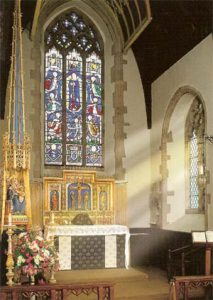 THE SLIPPER CHAPEL (THE SHRINE)

Built in the mid-14th century, and dedicated to Saint Catherine of Alexandria, this chapel served pilgrims on their way to England’s Nazareth. Saint Catherine was the patron saint of pilgrims to the Holy Land and her knights kept open the road to Nazareth during the Crusades.

Her tomb lies in the Monastery on Mount Sinai, within the Basilica of the Annunciation. Just as on Mount Sinai, Moses took off his shoes because he was on holy ground, so the pilgrims to England’s Holy Land used to remove their shoes and walk the Holy Mile into Walsingham.

After the Reformation, the Chapel was used as a poor house, a forge, a cow shed and a barn. It was restored to the Catholic Church in 1896 by Charlotte Pearson Boyd.

The first Mass since the Reformation was celebrated here in August 1934 and on 8th September 1938 the Shrine was re-consecrated by Bishop Youens of Northampton.

As well as the Statue of Our Lady, several images of Mary decorate the Slipper Chapel. Over the altar is the east window, the work of Geoffrey Webb in 1953 to commemorate the definition of the Dogma of the Assumption of 1950. The centenary window of the Annunciation is over the doors at the west end. 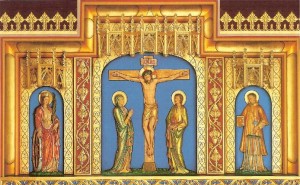 As well as the Statue of Our Lady, several images of Mary decorate the Slipper Chapel. Over the altar is the east window, the work of Geoffrey Webb in 1953 to commemorate the definition of the Dogma of the Assumption of 1950. The centenary window of the Annunciation is over the doors at the west end.

Over the West door of the Chapel below the image of the Holy Trinity, are the statues of Mary and the Archangel Gabriel, (given by Chorley K.S.C in 1958), reminding us of the words of the 15th century Pynson ballad of Walsingham: 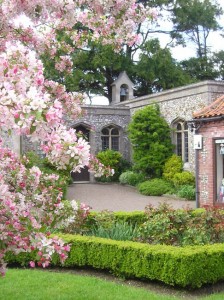 In the Cloister Garden is the Holy Water fountain, with its centrepiece, the baptismal font from the disused church of Forncett St. Mary, near Norwich. The four panels, depicting events in scripture in which water is given a special prominence are:

Moses and the Red Sea with the Hebrew text from Exodus 15:19 The Israelites went on dry ground right through the sea”
The Good Shepherd with the Latin text from Psalm 22 ”He led me beside restful waters”
The Baptism of Jesus with the Greek text Luke 3:22 “This is my beloved son”
The woman at the well with the English text John 4:14 – “I will give you living water”
The Easter ceremony of the Blessing of the Font is celebrated here and occasionally, the Sacrament of Baptism. The Font is much used by pilgrims to fill their bottles with Holy Water to take away with them.

In the cloister, is a bust of Cardinal Bourne who was prominent in the re-establishment of the Shrine in 1934 and led the first great pilgrimage of over 10,000 people in that year.

There is also a permanent exhibition illustrating the history of the Shrine since 1061. Also within the cloister is the Mass Intentions Office, a Gift and Bookshop and a Tea room, much sought after by weary pilgrims and visitors. 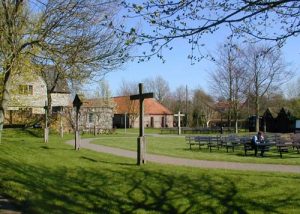 WAY OF THE CROSS

The 14 oak crosses of the great Cross-carrying Pilgrimage of 1948 form a Way of the Cross in the Shrine grounds. There is a notice listing the places they were carried from and the distances covered.

The 15th Station (The Resurrection) was carried by the Bletchley youth walkers in 1982, and is near the road-side door of the Chapel of Reconciliation.