History of the Catholic National Shrine

The Shrine of Our Lady at Walsingham was established around 1061 when, according to the text of the Pynson Ballad (c 1485), Richeldis de Faverches prayed that she might undertake some special work in honour of Our Lady.

“ Our Lady led Richeldis in spirit to Nazareth and showed her the house where the angel had greeted her. ‘Look, daughter’ said Our Lady. ‘Take the measurements of this house and erect another one like it in Walsingham, dedicated to praising and honouring me. All who come there shall find help in their need.

‘It shall be a perpetual memorial to the great joy of the Annunciation, ground and origin of all my joys and the root of humanity’s gracious Redemption. This came about through Gabriel’s message that I would be a mother through my humility, and conceive God’s Son in virginity.”  (Pynson Ballad 1485)

The Lady Richeldis was a holy woman with a great love of the Mother of God. She asked Our Lady for a way to honour her, and it was from this desire in her heart that the events of Walsingham unfolded. Richeldis was not a visionary like the children in Lourdes and Fatima. She was a woman of faith, she pondered, meditated and prayed. In answer to her prayer, the Virgin Mary led her in spirit to Nazareth, showed her the House of the Annunciation where the Angel greeted Mary, and asked her to build a replica in Walsingham as a perpetual memorial of the Annunciation.

This Holy House was built and a religious community took charge of the foundation. Although we have very little historical material from this period, we know that with papal approval the Augustinian Canons built a Priory (c 1150). Walsingham became one of the greatest Shrines in Medieval Christendom.

Walsingham is therefore a Marian Shrine of the Incarnation, a place of pilgrimage for all who would rejoice with Mary at “the great joy of the Annunciation.”

Let us, like Mary, conceive Him in our heart, that we may bring Him forth into our world, rejoicing with His Mother. Let us find help in our need here at Mary’s ancient Shrine where we rejoice with the Mother of God in the truth that “The Word became flesh and lived among us.” 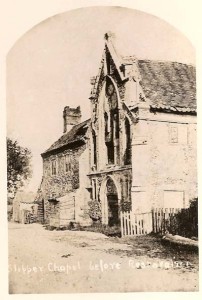 In 1538, the Reformation caused the Priory property to be handed over to the King’s Commissioners and the famous statue of Our Lady of Walsingham was taken to London and burnt. Nothing remains today of the original shrine, but its site is marked on the lawn in “The Abbey Grounds” in the village.

After the destruction of the Shrine, Walsingham ceased to be a place of pilgrimage. Devotion was necessarily in secret until after Catholic Emancipation (1829) when public expressions of faith were allowed.

In 1896 Charlotte Pearson Boyd purchased the 14th century Slipper Chapel, the last of the wayside chapels en-route to Walsingham, and restored it for Catholic use.

In 1897 by rescript of Pope Leo XIII, the sanctuary of Our Lady of Walsingham was restored with the building of a Holy House as the Lady Chapel of the Catholic Church of the Annunciation, King’s Lynn.

The Guild of Our Lady of Ransom, brought the first public pilgrimage to Walsingham on 20th August 1897. Visits to the Slipper Chapel became more frequent, and as the years passed devotion and the number of pilgrimages increased.

On 19th August 1934, Cardinal Bourne and Bishop Lawrence Youens led the Bishops of England and Wales, together with 10,000 pilgrims to the Slipper Chapel. At this pilgrimage, the Slipper Chapel was declared to be the National Shrine of Our Lady for Roman Catholics in England.

DURING THE WAR YEARS

Walsingham was a restricted zone and closed to visitors, but many service men and women showed interest in the Shrine. On May 17th 1945, the American Forces organised the first Mass in the Priory grounds since the Reformation. 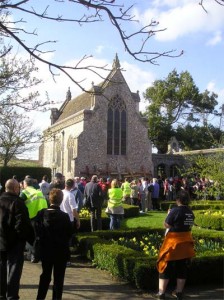 This and the great Cross Carrying Pilgrimage for Peace, Penance and Prayer in 1948 began traditions that continue today. Each year Student Cross still walk to the Shrine during Holy Week.

Between 1968 and 2015 the Marist Fathers had the care of the shrine and, with the Marist Sisters and others, were responsible for the ministry to pilgrims. With the appointment of the last Marist Shrine Director, Rt. Rev Alan Williams SM as Bishop of Brentwood, the Society was unable to provide a successor and Cardinal Vincent Nichols and the Bishop’s Conference of England and Wales appointed Monsignor John Armitage as Rector of the National Shrine. The Marist Sisters and various secular priests continue their ministry at the Shrine 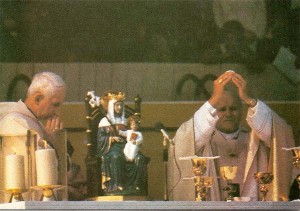 During the Visit of Pope John Paul II to England in 1982, the Slipper Chapel Statue was taken to Wembley Stadium and was carried around the stadium prior to the Papal Mass preceded by The Director of the Roman Catholic Shrine (Fr Clive Birch sm) and the Administrator of the Anglican Shrine (Rev Christopher Colven).

The existing shop, cafe and offices at the Shrine were developed in 1988. Later developments further enhanced the facilities.

In 1997 there were celebrations to mark the centenary of the first post-reformation pilgrimage which took place on 20th August 1897. One of the lasting legacies of the centenary celebrations is the Annunciation Window in the Slipper Chapel which was a gift of the Guild of Our Lady of Ransom, whose forebears had organised the 1897 pilgrimage. The affairs of the Guild are now administered from the Offices of the National Shrine

The Shrine now attracts some 150,000+ pilgrims during the pilgrimage season with about 35 Major Pilgrimages from Catholic, Diocesan or Ethnic groups and Catholic Societies or Associations as well as many Parish and Overseas groups. At present our largest Pilgrimages are those of the Tamil community who come each May (c.6,000) and again in July with about 15,000 pilgrims, some being Christian and some Hindu in faith. The Syro-Malabar community bring about 5,000 pilgrims on their National Pilgrimage in July.

THE BASILICA OF OUR LADY OF WALSINGHAM 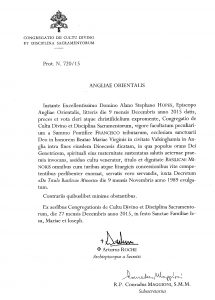 On the Feast of the Holy Family, 2015, during Pontifical Mass in the Chapel of Our Lady of Reconciliation at the Shrine, Bishop Alan Hopes read out a document from the Vatican, stating that Pope Francis was pleased to confer the title of Minor Basilica on the Shrine. There are only three sites with that title in England, the other two being St Chad’s Cathedral in Birmingham and Downside Abbey Church.

THE CATHOLIC PARISH CHURCH OF OUR LADY OF THE ANNUNCIATION

In April 2005 the local Catholic Parish Church of Our Lady of the Annunciation (a 1950’s temporary structure) in Walsingham village was demolished, and a beautiful new Church with twice the capacity built on the site. Because of its use by pilgrims resident at Elmham House, the Catholic Shrine’s accommodation, the Shrine was instrumental in raising a great deal of the £1,345,000 needed for this project. The Church was consecrated by Bishop Michael Evans of East Anglia on 24th March 2006, and the Tower Sculpture was blessed by his successor Bishop Alan Hopes on May 4th 2017 marking the completion of the project.

We use cookies to ensure that we give you the best experience on our website. If you continue to use this site we will assume that you are happy with it.OK