Book to be in King’s Lynn & Walsingham for these momentous anniversary Events!

Tim McDonald reflects: One of the highlights of my service at the National Shrine was when (Bishop) Fr. Alan Williams SM appointed me co-ordinator of the 1997/8 Centenary Celebrations to mark the establishment of the Pope Leo XIII Shrine to Our Lady of Walsingham in the Catholic Church of Our Lady of The Annunciation at King’s Lynn and the Centenary of the First Modern Day Pilgrimage.

A year-long programme was put together including a series of Sung Masses using local choirs, a Flower Festival that embraced all the Churches and Shrines in Walsingham and a Choral Week with sung Liturgies and concerts ending every evening with sung Compline. The Final Concert was given by Westminster Cathedral Choir on their first visit to the Shrine There was also an Historical Conference, and many new pilgrimages some of which have returned annually until the Pandemic.

The celebrations commenced on Tuesday 19th of August 1997 with Cardinal Cahal Daly presiding at a solemn Mass at The Walks in King’s Lynn. A replica of the King’s Lynn Statue was carried from the Mass to The Slipper Chapel where it arrived in time for the 12.00 Mass celebrated by the Cardinal marking the 100th Anniversary of Modern-Day Pilgrimage. On the afternoon of the 20th after the Mass, the Cardinal unveiled a new stained glass window of the Annunciation over the west door of the Slipper Chapel.

This year, 2022, is thus the 125th Anniversary of the 1897 events, and Canon Peter Rollings, Parish Priest and Rector of the Pontifical Shrine in King’s Lynn has prepared a series of events to mark this important anniversary. These have already included a Flower Festival, and a Parish Garden Party in July.

Forthcoming Date for your Diary at the Pontifical Shrine of Our Lady of Walsingham in King’s Lynn:

A celebratory Mass at 7.00 pm on Friday 19th August with Mgr John Armitage, current Master of the Guild of Our Lady of Ransom, former Rector of the National Shrine of Our Lady, being the Preacher.

And at the Basilica & National Shrine of Our Lady, Walsingham:

On Saturday 20th August there will be a recreation of the First Pilgrimage of Modern Times, with a procession from Walsingham Railway Station (St Seraphim’s Orthodox Chapel and Museum) to the Slipper Chapel with a commemorative Mass at 12.00 noon.

To quote from the Lynn Advertiser of August 27th, 1897, in an article entitled

“Pilgrimage to the Shoe Chapel” …

As briefly stated in our last issue, the visitors who had taken part in the ceremony of reviving the pilgrimage to the shrine of “Our Lady of Walsingham” [which custom, by consent of the Pope (Leo XIII) has been transferred to the Roman Catholic Church, Lynn] on Thursday 19th inst. made a pilgrimage the following day to the little way-side chapel at Houghton-in-the-Dale, locally known as the “shoe house” The building which is said to have been erected about 1380 is a fine specimen of the transition from the Decorated to the Perpendicular styles of architecture, and was in the Middle Ages the place where pilgrims removed their shoes, it being a ‘conditio-sine-qua-non’ that the last mile of the journey was to be done barefooted…

…The pilgrims numbering about 40 or 50 arrived at Walsingham by the 12.08 pm train from Lynn, and forming into a procession, headed by a Crucifix with burning tapers either side of it, proceeded singing to the little Chapel. On arrival, there was a short private service, after which the public were admitted and there was another service of a very brief but devout character. The visitors then went back to the Black lion Hotel where Luncheon was provided, the remains of the Abbey (sic) Priory etc. were visited and the party left by 3.55 pm trail

There will be no train journey and no Black Lion Hotel Luncheon this August 20th, but it is hoped that the procession will number more than 40 or 50 pilgrims, please come along and join in.

The Pontifical shrine of Our Lady of Walsingham 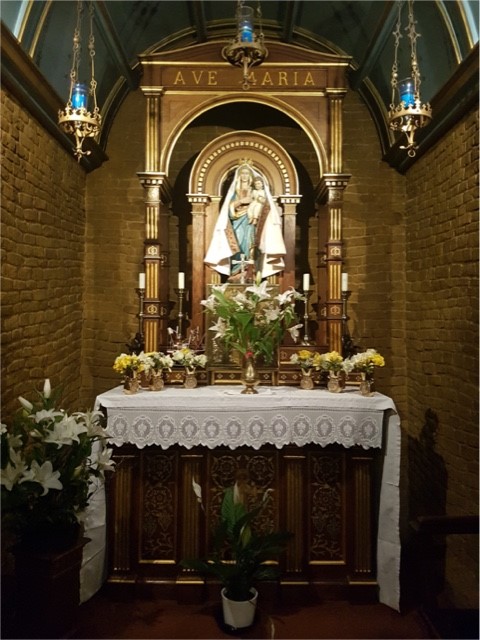 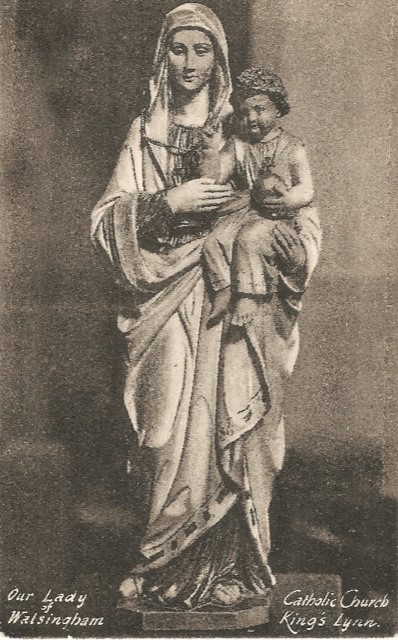 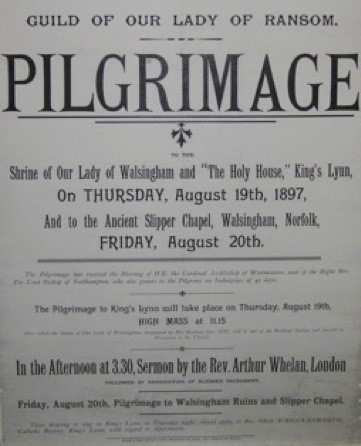