“Americans give thanks for victory in final pilgrimage:
original Shrine at Walsingham has Mass after 400 years”

This was the headline in the Universe, a week or so after VE Day 1945, the 75th Anniversary of which we celebrated a few days ago, in a subdued fashion during the current Corona Virus restrictions.

“On Thursday last week (May 17th 1945), between 500 and 600 Officers and men of the U.S. Eighth Air Force from 11 bases in the East Midlands, went to give thanks for victory.  For the first time since the Shrine was destroyed by Henry Vlll in 1538, they had Mass over the very spot where the High Altar of the great Augustinian Priory stood.  It was a ‘goodbye’ pilgrimage too, for now that Germany is beaten the eighth Air Force is moving out.

Just before noon the pilgrims began to arrive in two-and-a-half ton trucks, big busses, jeeps, and cars.  “Traffic Cops” from the 306th Bomb Group were posted round the village to direct the drivers to parking places.  Between noon and 1.00 o-clock Confessions were heard in the little Franciscan Chapel by Father Pacificus OFM Cap. and Fr Dempsey, an RAF Chaplain.

The pilgrims formed up in Friday Cattle Market.  Headed by the Stars and Stripes and the yellow and white of the Papal Flag, with an armed guard of honour, they marched into the Shrine, onto the lawn where before the Refomation the great Priory Church stood.  Before the massive grey arch of the east window, all that now remains of the church, the Mass was offered … Behind the altar, immediately under the arch, was the choir of Air Corps Sergeants.  To the left of the altar was an improvised pontifical throne where Bishop Parker (of Northampton) presided.

A flower decked statue of Our Lady on the other side had been brought 100 miles from the chapel of the 306th Bombardment Group…Somehow it seemed quite natural to hear out there the low murmur of the celebrant’s voice, the solemn tones of the deacon singing the Gospel and the choir’s strong voices in the ‘Credo’ above the ever present song of the birds…Khaki-clad acolytes moved with noiseless footsteps across the soft turf of the sanctuary as the celebrant arms outstretched, beneath the great arch, faced the congregation and made the soft voiced invitation ‘Orate Frates’. 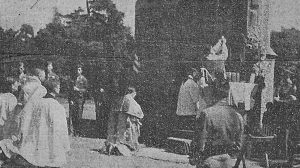 Batteries of cameras recorded-for the official records, for the Press, but chiefly for many American Homes.  Fr Adrian Poletti of St. Joseph’s Passionist Monastery, Baltimore, leader of the first pilgrimage a year ago and chiefly responsible for arranging this farewell, was the preacher…”Throughout the ages” he said “devotion to Our Lady has been a prominent sign of the Church’s existence.  In England almost every other church was dedicated to Our Lady and the country became known as the Dowry of Mary”…”This is a pilgrimage of thanksgiving, what could be more fitting than to have a Mass in honour of Our Lady on this spot.  While we stay close to Mary we will never stray from her Divine Son.  When we go home, let us remember this spot and our privilege in taking part in this first Mass here for 400 years.”

As the Consecration approached low-toned words of command broke the silence and the guard presented arms.  Large numbers received Holy Communion.  At the end of Mass, while the whole congrega 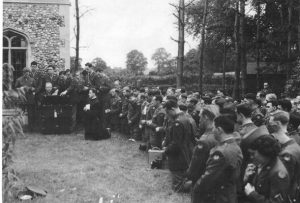 tion sang ‘Bring flowers of the Rarest’ eight WACs filed up to the sanctuary.  With rifles at the trail the guard of honour marched to Our Lady’s statue.  A Cleveland girl, Sgt Rosalie Esser, mounted the wooden steps and crowned the statue with flowers.  The crown itself was made by a convent educated non-Catholic WAC.

Before pontificating at the closing Benediction, Bishop Parker told the men that he was “profoundly moved” to see them gathered on the lawn to pay homage to Our Lady….”

The Priory at Walsingham was dissolved in 1538, and Masses ceased.  The Monastic buildings were sold for £90, and the community of Canons were scattered, like so many of the monastic foundations throughout England, as a result of the Protestant Reformation.

With the American forces joining in the war effort, many of the United States Air Force were stationed in the East of England, particularly in Norfolk, and were the only pilgrims to Walsingham, in an area which was classed as ‘Classified’.  Today, devotion to Our Lady of Walsingham exists in America due to these men and women returning home after this momentous event.

Archivist, Basilica and National Shrine of Our Lady, Walsingham, England

History of the Shrine
Walsingham 24/7 Livestream